I’m pleased to welcome author and book blogger PAULINE BARCLAY as today’s guest on Loving Life who talks about one of her favourite walks.

A Walk Along the River Wensum

Thank you, Kit, for inviting me to your wonderful blog where I read so many interesting posts, I hope I can maintain the standard! As much as it is always great to talk about my books and my other passion, Chill Awards for Independent Authors, I thought today we could take a meander along the beautiful River Wensum in Norwich, Norfolk.

The Wensum is the principal river on which the city of Norwich was founded in1659 by settlers from Saybrook. The source of the Wensum lies between the villages of Colkirk and Whissonsett in northwest Norfolk. The river flows westward initially, close to the villages of South Raynham, West Raynham and East Raynham, passing Raynham Hall, home of the Marquis Townshend. The Wensum then turns and flows north through a number of small villages until it reaches Sculthorpe, where it turns east through the market town of Fakenham. The river then flows in a south-easterly direction through the Pensthorpe Nature Reserve and the village of Great Ryburgh. 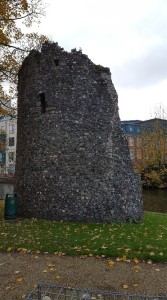 The Wensum continues through or close to the villages of Guist, North Elmham, Worthing, Swanton Morley, Lyng, Lenwade and Taverham before entering the City of Norwich from the northwest via Drayton, Costessey and Hellesdon.

At New Mills Yard, a former waterworks, the river becomes tidal and navigable by boat. Flowing through the city, the river forms a broad arc which would have influenced the site of the settlement for defensive reasons. Remnants of boom towers can be seen near Wensum Park and Carrow Hill which formed part of the city wall and a large defensive tower can be seen on the bank near Barrack Street, called Cow Tower. 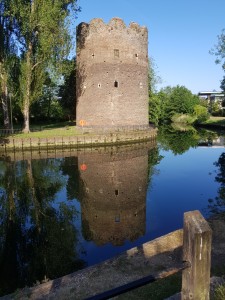 This dates to the 12th century and was also used for collecting tolls. Evidence of the river’s historical use as a means of transport for goods and trade from the continent is still visible: mills, quays and industrial remnants can be found near the station and along King Street, and a slipway at Pulls Ferry marks the start of a canal originally used to transport stone from Caen in Normandy, in the 13th Century, to build Norwich Cathedral. This site was also a public house and used as a River Ferry until the 1950s. 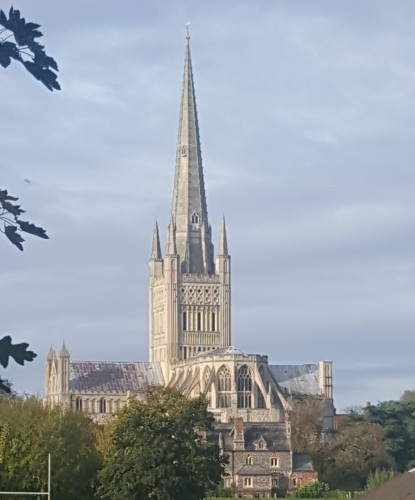 One of the gates to Norwich Cathedral

Today, the Wensum is a beautiful place to walk and enjoy some of the wildlife that lives there. 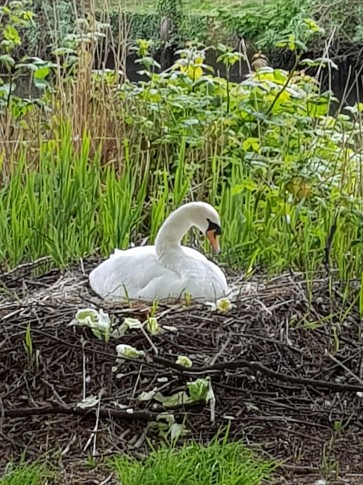 Swan on her nest

During the summer months, the Wensum is home to river cruisers, canoes, board surfers and small crafts. 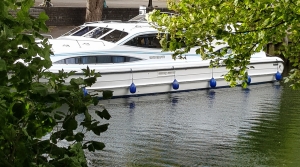 It is a beautiful place to walk whatever time of the year, spring brings hope with all the new buds and leaves.

Autumn is especially beautiful with its riot of golden leaves. 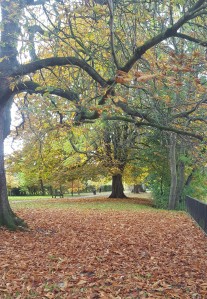 A haunting winter scene does not detract from the beauty of this river.

Sadly, this is the end of our walk today. I hope you have enjoyed it as much as we do. There is always something different to see no matter what time of the year. I hope we can do this again sometime. Thank you for joining me.

All the photographs were taken by me.

Thank you again, Kit for having me here, it has been wonderful.

If you’d like to write a Guest Post for Kit Domino’s World, be it on Loving Life or about writing, books, reading, blog tours or book releases for Kit’s Library, please contact me.