In celebration of my new novel White Stones, my previous novel Every Step of the Way is for 5 days only available to download on Kindle for free.

This book was shortlisted in 2004 for the Harry Bowling Prize for a London novel. It tells the story of Beth, a young teenager whose world is thrown into darkness and chaos when London is hit by the 1952 Great Smog, leaving in its wake a trail of death and disruption, and changing her life in ways she never thought possible. In the emerging teenager culture of juke boxes and coffee bars, Teddy Boys and gang fights, Every Step of the Way envelops much of the social history of the 1950s.

In February 2019, Every Step of the Way was awarded a Chill with a Book Award, as recommended by its readers. 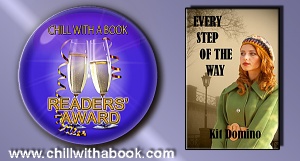 A few of the reviews for Every Step of the Way

“…brilliant depiction of early 50s culture, complete with quiffs, drainpipes and juke-boxes, set against the moral as well as economic austerity of the post-war years. The other is the spirited and engaging heroine who for much of the book is alone against the world. …I was rooting for Beth from page one and could not have left without knowing the outcome of her dramatic story. It’s no surprise that this book just missed the Harry Bowling Prize for a novel set in London and if you fancy a warm-hearted read and a touch of nostalgia this is for you.”

“This novel, set in London and Gloucestershire in the aftermath of WWII, gave me a real sense of what life was like in the 1950s, when rationing was still in place and the women who had kept the country going in the fields and in the factories during wartime, were all back at the kitchen sink. It must have been a difficult time for teenagers to grow up in and Kit Domino captures the essence of the 1950’s era exceptionally well. The depiction of the London smog and its effects on the population is particularly harrowing and poignant and this is where this story begins. We follow the life of Beth, a 16-year-old girl living in 1950’s London, who through experiencing love, life and loss, becomes a grown woman by the end of the novel. It’s a coming of age story that is beautifully written, expertly told, and one I simply couldn’t put down. Highly recommended.”